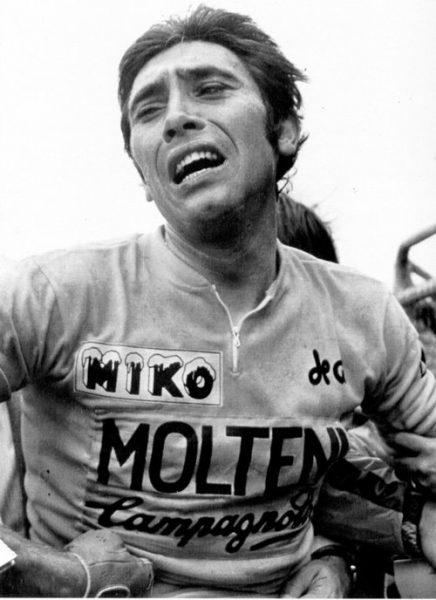 Paul is co-founder of Wishbone.

“A veritable Dante’s inferno, scenes of incredible torture and even martyrdom”, says the narrator of Jørgen Leth’s great documentary, A Sunday In Hell, an account of the 1976 Paris-Roubaix bicycle race. As he speaks we watch cyclists with blood and mud spattered faces try to rescue their battered bikes after crashing on the slippery cobbles. Impressive action sequences follow, along with close-ups of the anguished racers and behind-the-scenes stories that populate a densely orchestrated film. It’s a record of a wonderful piece of theatre.

I’m a keen long-distance cyclist, although I’m not in it for the blood and gore of Paris-Roubaix. I like cycling for reasons that have been often catalogued by others. It’s a stress reliever. It’s prolonged and pretty intense exercise, so it makes you feel good. It also allows for a kind of joyful meditation, if you’re not racing and the road conditions allow. As you cut through a landscape, you’re engulfed by the sounds, smells and the light of the countryside. Unlike walking, you don’t dwell on any bit too long because the picture is constantly changing, so you return to the train of your thoughts. Or you can simply stop thinking – just pedal and enjoy the sensory experience. In a car you’d feel cocooned, looking out of the window as if you’re watching a film; on a bike you feel you’re in the film.

But long-distance cycling can also be one of the most demanding of endurance activities. In cycle sport the best road racers are like tragic heroes, triumphing or failing. Like demi-gods they carve their way across real geographical landscapes we may recognise or actually know. They’re not confined to a track or stadium; their arena may be the town where you live, the road through your village. Cyclesport is unique in this way. It has an immediacy rooted in a real landscape . And the frantic parade is rich in emotion: expectation and frustration, vulnerability and aggression, defeat and victory.

I’m reminded by all of this of theatre performing. The ritualistic preparation in a cycle race parallels the preparation of the actor. In A Sunday In Hell, a bike mechanic produces a steel ruler under the obsessive eye of rider Eddy Merckx. His handlebar is deemed to be one millimetre too high, then his bike saddle two degrees wrongly angled. All this is redolent of actors fastidiously adjusting their costume, or props, or ‘space’. Then we see some top riders having an introspective moment as their masseurs pummel away at their bodies. Back in the day, the cyclist’s masseur was often the ultimate confidant who worked his magic, preparing the star both physically and mentally for the great ride. It reminds me of the account of acting teacher Lee Strasberg standing around on the side of a film set, privately mentoring Marilyn Monroe about the way to play a scene, all the while massaging her vulnerable ego. ‘Soigneurs’ the French call them, working their mojo. Essential players in a ritual that strengthens intention.

Once the show is ready to roll, there’s the whole ‘stage management’ of the bicycle race – the announcers, the officials. And the team director of course, like a theatre director, trying to calmly hold the show together, knowing really the race is now out of their hands. Here come the players: there’s the leading actor in the cycling team, the Chris Froome if you will, then the second in command, then the supporting actor who acts as a foil to help the spectacle. There’s the rest of the cast, minor characters or ‘domestiques’ in cycling parlance (they’re not minor, they’re crucial to everything – of course), who will help make it all happen. Their fans will applaud and cheer. The stage will resound. And then it will start again the next day. There are 21 ‘stages’ in the Tour de France.

In Leth’s film we’re constantly made to think about what is going on inside a rider’s mind, particularly when he’s shot in close-up. Internal dramas play out in the way they do for an actor: will I actually be able to do this? Will I actually forget what to do? What if I’m ill? Will I pace myself properly? Admittedly competitive cyclists don’t have lines to remember, a strategy maybe. But they do worry about their performance, their ‘form’. They’re worried about how good they’re going to be on the day, like actors and dancers. And of course cycle racing is a partly choreographed dance, as the teams pass through fluid formations en route. They try not to think whether they’ll crash and suffer pain and ignominy. They don’t think about it. They pretend not to think about failing. Like actors, they attempt to conquer negativity.

“With each turn of the pedals, every single metre gained hurts”, says the commentator later on in A Sunday In Hell. You are struck by this drive simply to keep going. It made me think of Wishbone’s drive. We’ve been making theatre now for fifteen years. Some would use the term ‘mid-career’ artists to describe us, and we wryly shrug our shoulders. Our development has never really taken a traditional arc starting with ‘emerging’. We weren’t new when we ‘emerged’, and we’re hardly in the middle of our career. In fact I was wondering today if there are many other theatre makers now in middle-age who are ‘emerging’. We’re always ‘emerging’. Often, as for many companies, our process is greatly prolonged due to lack of funding. Or because our new piece doesn’t quite fit the category that some promoters put our work in before. Often our projects are simply not seen by enough people. (One of the reasons we’re doing a short-form version of Mountain High Valley Low for non-theatre spaces.)

The majority of competitive cyclists never make the podium. They have to cope with failure, and they have to make sense of it. So do we, as theatre makers. We have to do it a lot. Riders cope by believing in a sense of duty. Every rider thinks: “I can’t let my team down, I can’t let myself down. I’ve committed to this. I must not be distracted, and if at any point I falter, I must not let myself be defeated. The show must go on. Because I must do this, not just for me, but for my team and for the sport.”

Over the years we’ve realised as theatre makers that our sense of duty doesn’t just lie towards a particular show. It lies towards our audience. I feel in the past I mainly thought of our work almost in isolation, complete in itself, as if it existed ‘out there’ like an artefact. But that can’t be, or shouldn’t be so, and certainly not in the case of Mountain High Valley Low, which deals with sensitive issues of mental health. For the character Josie in Mountain High Valley Low, it’s about her carrying on and managing, and sorting her life. For us, our duty is to make her journey of mental endurance one that our audience, whether or not they consider themselves beset with mental problems, will really connect with and take something from.

In another of Leth’s cycling films The Stars and the Watercarriers, his narrator talks about the bike race as: “… the way to exercise the power of coincidence, to make ready for the trial of truth”. We were asked recently in an interview with Exeunt Magazine how we came up with the idea of making our current show. We couldn’t answer exactly: it was the coincidence of our moods, our time in life, our needs and interests. Karen and I look forward to being able to make and shape the final avatar of Mountain High Valley Low – the full-length version. That will be ‘our trial of truth’.